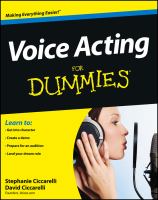 Make a career out of your voice? Easy. <p>Voice acting is like acting, but just using your voice! It's a unique career where the actor's voice can be heard worldwide-in commercials, on audiobooks, in animated movies, documentaries, online videos, telephone systems and much, much more. The point is to bring the written word to life with the human voice.</p> <p>With step-by-step explanations and an abundance of examples, Voice Acting For Dummies is the ultimate reference for budding voice actors on auditioning, recording, producing voice-overs, and promoting themselves as a voice actor.</p> Creating a voice acting demo Finding your signature voice Interpreting scripts Using audio editing software Promoting your voice acting talents <p>If you're an aspiring voice actor or an actor or singer considering a career transition, Voice Acting For Dummies has everything you need to let your voice talents soar.</p>