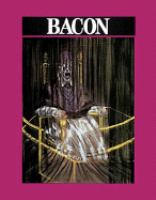 "Francis Bacon (1909-1992), arguably the preeminent British painter of the twentieth century, was also for forty years the most controversial. Bacon's art often appears deliberately disturbing. His subject was the human form. Bacon reinterpreted the physical construction of the body with a new and unsettling intensity. To him it was something to be taken apart by the artist's penetrating gaze and then put back together again on canvas. He forces us to see, perhaps for the first time, the separate shapes and stresses hidden in the familiar human figure." "Bacon's treatment of the face could be especially challenging. In his portraits, generally of people the artist knew well, the subjects are sometimes shown screaming. Even in repose the features shift and reshape themselves before our eyes, yet they never become unrecognizable despite the swirling paint." "Often called an Expressionist or even a Surrealist, Bacon himself strongly rejected both labels. He insisted that in its own way his work was close to the world we see every day, remaining true to what he called "the brutality of fact."" "This book reproduces in full color sixty-eight of Bacon's most important paintings, including several of his well-known triptychs. Completing the volume are documentary photographs of Bacon's studio, his associates and models, and works by other artists that affected Bacon's paintings."--BOOK JACKET.Title Summary field provided by Blackwell North America, Inc. All Rights Reserved