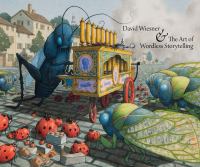 The first publication to show the creative process of David Wiesner, one of the world's most acclaimed children's book illustrators <br> <br> A master of storytelling through pictures and three-time winner of the Caldecott Medal, David Wiesner (b. 1956) is one of the most highly acclaimed book illustrators in the world. This handsome volume is the first to examine his creative process and his many sources of inspiration. The book features dozens of lavish color plates, from early work to the exquisitely wrought watercolors that are the basis of his best-known books, along with pages excerpted from his forthcoming first graphic novel, Fish Girl . Also included are works by some of the artists most influential to Wiesner, including Marvel comic book legends, Surrealist and avant-garde masters, and mid-20th-century graphic artists. While illustration has often been marginalized in the world of fine art, the vibrant interplay among paintings, prints, comic books, graphic novels, iconic 20th-century films, and cartoons in Wiesner's art gives evidence to the complexity of the American tradition of picture book illustration.