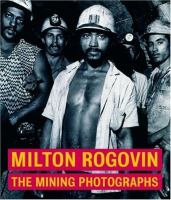 Born in New York in 1909, Milton Rogovin has been photographing coal miners since 1962, working first in Appalachia and later, in the 1980s, in Europe, Asia, South Africa, China, Mexico, and Cuba. Particularly in these later portraits he concentrated on the lives of miners as revealed at work and at home. Men and women portrayed at a mine entrance or in a changing room, covered in coal dust, are barely recognizable in the accompanying photographs, where they proudly stand in their living rooms or backyards, holding a pet or posing with their families, surrounded by their cherished belongings.<br> Milton Rogovin: The Mining Photographs presents more than one hundred of these direct and powerful images, usually in pairings that reveal Rogovin's unsentimental regard for men and women whose dangerous work is shown to be only one part of their complex lives. With an introductory essay by Judith Keller, associate curator of photographs at the Getty Museum; a chronology of Rogovin's life and career and a selected bibliography are provided by Melanie Herzog.