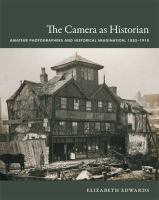 The camera as historian : amateur photographers and historical imagination, 1885-1918.

In the late nineteenth century and early twentieth, hundreds of amateur photographers took part in the photographic survey movement in England. They sought to record the material remains of the English past so that it might be preserved for future generations. In The Camera as Historian , the groundbreaking historical and visual anthropologist Elizabeth Edwards works with an archive of nearly 55,000 photographs taken by 1,000 photographers, mostly unknown until now. She approaches the survey movement and its social and material practices ethnographically. Considering how the amateur photographers understood the value of their project, Edwards links the surveys to concepts of leisure, understandings of the local and the national, and the rise of popular photography. Her examination of how the photographers negotiated between scientific objectivity and aesthetic responses to the past leads her to argue that the survey movement was as concerned with the conditions of its own modernity and the creation of an archive for an anticipated future as it was nostalgic about the imagined past. Including more than 120 vibrant images, The Camera as Historian offers new perspectives on the forces that shaped Victorian and Edwardian Britain, as well as on contemporary debates about cultural identity, nationality, empire, material practices, and art.

Edwards (De Montfort Univ., UK) identified 73 amateur photographic groups, studied 17 in detail, and examined some 55,000 photographs to investigate the relationship between photography and the historical imagination from 1885 to 1918. This photographic survey--operating on a local and national level--differed from previous architectural recording efforts in its ambitious scope and in engaging amateur operators. Probably because of the scope, British survey photography has lacked extensive studies, so this thoughtful analysis by Edwards of a complex set of practices and narratives is welcome. Generated in a culture undergoing critical redefinition, the survey movement intended to create a useful public archive for future use. Edwards makes the important point that the survey movement was not nostalgic and conservative, but rather aimed at creating a future that understood its past. She analyzes the uneasy relationship between local, national, and imperial narratives; the question of photographic style (factual, pictorial, and/or picturesque); the use of scientific standards and values; the issue of "selective tradition"; the broader social composition of the survey photographers; the community of interests and intentions between the photographic societies and others such as antiquarian and folkloric societies; the documentary presentation of the photos; and public access to the photographs. Summing Up: Highly recommended. Lower-level undergraduates and above. S. Spencer North Carolina State University