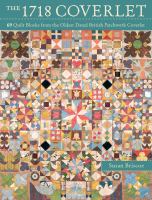 Quilters will be delight in this book featuring the earliest dated piece of British patchwork--the 1718 coverlet. The 1718 coverlet is the earliest known British patchwork that has a date worked into the piece and forms a benchmark against which all other rare survivors of early 18th century patchwork can be compared.Step back in time and learn how to recreate each of the stunning 69 blocks by just following the detailed instructions offered in the book, which you can then use individually or together to make your own replica coverlet.A fabulous historical quilting reference the coverlet was made using the Mosaic patchwork technique--a time-consuming method requiring the use of paper for templates. Some of the paper templates still remain in the coverlet and provide tantalising glimpses of printed and hand written text including bills, letters and printed text as well as hand drawn designs for the quilt.