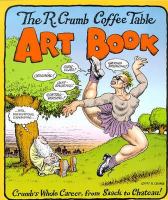 In the late sixties, a number of cartoonists re-created the comic book as a vehicle for artistic expression. Never again would comics be produced exclusively to entertain children - that mold was broken. At the forefront of this movement was R. Crumb, a young man steeped in the history of comics and boiling with LSD-inspired visions. His work then and since has established him as one of the masters of the art form. The R.Crumb Coffee Table Art Book collects the finest work from throughout Crumb's career, ranging from some of his earliest published comics in the mid-sixties to work completed in the nineties. His best stories, illustrations, covers, and paintings are here, many of them appearing in color for the first time. There is a rich representation of Crumb's early work, including drawings for Harvey Kurtzman's Help! in the sixties and examples of his youthful work as a greeting card artist. Selections from Crumb's sketchbooks over the years reveal the evolution of his style and the development of ideas over time. Brief commentaries by Crumb are interspersed throughout the book, illuminating his early love of comics, his career, his obsessioins with sex and old music, and many other aspects of his life and work. This volume collects for the first time the full range of Crumb's subjects, including such legendary pages as 'Keep On Truckin' and 'Stoned Again!' and familiar figures like Mr. Natural, Fritz the Cat, Devil Girl, and the artist's favorite subject, R.Crumb. Lavishly designed and printed, The R. Crumb Coffee Table Art Book is a feast from one of the great original American artists of our times.