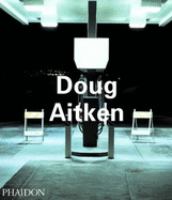 <p>American video and installation artist Doug Aitken (b.1968) exploded onto the international art scene with his multi-screen work electric earth , which captivated audiences at the Venice and Whitney biennales in 1999. This work focused on the bizarre nocturnal experiences of a young man exploring the edges of Los Angeles, presenting dream-like sequences that rearrange the linear flow of narrative into a series of unforgettable, disjointed photographic tableaux. Like much of his work, it contrasts the high-tech speed of contemporary daily life with the monotony of the urban landscape. In other works he has explored the eerie, desterted atmosphere of Jonestown, Guyana, the site of the notorious mass suicide of religious cultists (monsoon, 1997); a remote diamond-mining region of Namibia, closed to outsiders since 1908 (diamond sea, 1997); and the collective dreams of India's Bollywood film industry (into the sun, 1999). Portraying some of contemporary art's most beautiful imagery, Aitken's installations encircle the viewer, creating a suspended, hyperreal portrait of contemporary life.</p> <p>In the survey, curator and critic Daniel Birnbaum sets Aitken's art within the context of contemporary philosophy and the work of other recent artists who have explored expanded notions of time and space. In the Interview, Friezepublisher and critic Amanda Sharp discusses the artist's working methods, while in the Focus section critic Jörg Heiser looks at Aitken's i am in you (2000), a five-screen work centring on the imaginative experiences of a young girl. For his Artist's Choice Aitken has selected a short story by Jorge Luis Borges, whose description of altered realities through the distortions of mirrors and memory echoes the artist's own interests. Artist's Writings include Aitken's retelling of an unusual story he once heard from strangers, which served as the basis for subsequent video work.</p>