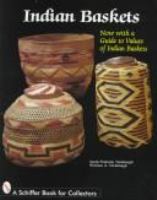 This introduction to American Indian basketry will delight newcomers and irritate scholars. The delight comes in the numerous large clear photographs and the attractive format. In the manner of a good introduction, the book covers the basic information needed by a novice. Included besides a history of Indian basketry, techniques of manufacture and decoration, form, materials, and care of baskets, are a glossary, set-off tables, and line drawings. A major portion of the book is a comprehensive illustration and description of baskets produced by various tribes from different parts of North America. Although the authors state that this section may be used to identify the tribal origin of baskets, the information provided is much too general to serve such a purpose, and scholars will point out that one or two photographs are insufficient evidence on which to base identification. Scholars will also be irritated by the lack of measurements and catalog numbers for most baskets in the introductory ``Showcase of Basketry'', by the lack of references, by the word-for-word repetition of text information in picture captions, and by errors of fact that could have been avoided. The authors state that the Sun Dance is no longer performed, but W.K. Powers's Oglala Religion (CH, Feb '78) and F.W. Yoget's The Shoshoni-Crow Sun Dance (CH, Mar '85) clearly show the continuing vitality of the Sun Dance and other plains Indian traditions. Recommended for all general libraries, but students should turn to the scholarly works to satisfy their interests.-M.J. Schneider, University of North Dakota