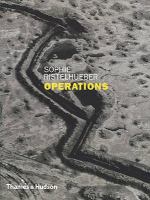 In Sophie Ristelhueber's large-scale artworks and installations, the photographed landscape appears in fragments: damaged, rent, pockmarked. These traces of history and conflict, which the artist calls 'details of the world', are like scars on a body, and they convey a similar tale of wounds scarcely healed. Ristelhueber has photographed these metaphorical landscapes in war-torn places like Beirut, Kuwait, Bosnia and Iraq since 1982, recording the violence inflicted on the surface of the earth by the machinery of war. Rather than focusing on the geopolitical meaning of a particular conflict, Ristelhueber is engaged with the ambiguities of what she calls the 'terrain of the real and of collective emotions'. In her magisterial triptych Iraq, rows of burnt, decapitated palm trees stand in a blasted-out landscape; they are like, the artist says, 'the remains of a defeated army.' Although the image clearly resonates with the current war in Iraq and ongoing conflicts in the Middle East, Ristelhueber's approach implies that the current situation is part of an unceasing historical cycle of destruction and construction. In her photographs, the surface of the land becomes a kind of palimpsest on which the disfiguring marks of decades of conflict continue to be recorded.