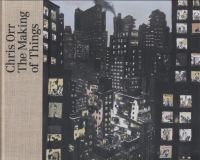 Chris Orr : the making of things.

Chris Orr MBE RA is one of Britain's foremost printmakers. In this definitive book he and Robert Hewison explore his remarkable printmaking career, from his early experiments as a student in the 1960s, when he first discovered how etching could enhance his drawing, to his later innovations in lithography, silkscreen and digital printing, and his ingenious use of long-forgotten processes. Hewison also considers the significant contribution that Orr has made to printmaking as a teacher, first at Cardiff College of Art and then in London at Central St Martins and the Royal College of Art, where he was Professor of Printmaking from 1998 to 2008. Illustrated with over 150 of Orr's theatrical, witty and wilfully allusive prints, this book looks for the first time in depth at the gloriously original output of a ceaseless inventor. AUTHOR: Robert Hewison is a critic and cultural historian. He has published widely on the culture and art of Britain in the nineteenth and twentieth centuries. Chris Orr MBE was elected a Royal Academician in 1995. In 2008 the Royal Academy published a book of his prints, The Multitude Diaries, and in 2012 an exhibition of his lithographs was shown in the Academy's Tennant Gallery. SELLING POINTS: * The definitive study of the work of Chris Orr MBE RA, one of Britain's leading printmakers * Spans his entire career, from early printmaking experiments as a student in the 1960s, to his more recent use of long-forgotten printmaking processes * Sumptuously illustrated with over 150 of Orr's finest works * Foreword by Michael Palin 175 colour