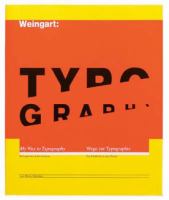 Typography - my way to typography.

Both as a teacher and a designer, Wolfgang Weingart's influence on the development of typography since the 1970s is unparalleled. As the successor to Emil Ruder at the world-famous Schule fur Gestaltung in Basel, he enhanced the rigor of Swiss Typography with experimental verve and creativity; he also put his innovative ideas to work for Typografische Monatsblatter. Countless designers in North America and Europe have been inspired by his teachings and lectures. In Typography, Weingart sums up an impressive lifework in 500 pages that describe his own development and the foundations of his teachings. This is a long-awaited book of epochal significance. 450 illustrations