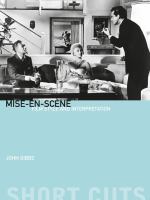 Mise-en-sc#65533;ne: Film Style and Interpretation explores and elucidates constructions of this fundamental concept in thinking about film. In uncovering the history of mise-en-sc#65533;ne within film criticism, and through the detailed exploration of scenes from films as Imitation of Life and Lone Star, John Gibbs makes the case for the importance of a sensitive understanding of film style, and provides an introduction to the skills of close reading. This book thus celebrates film-making as well as film criticism that is alive to the creative possibilities of visual style.