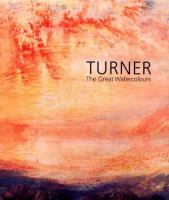 J.M.W. Turner (1775-1851) is considered Britain's greatest painter. While he is best known for his stunning oils, Turner also created major works in watercolor, many of which rival his oils in their breadth of scale, depth of tone, richness of color, and wealth of detail. This handsome volume, published on the 150th anniversary of Turner's death to accompany an unparalleled exhibition of his finished watercolors at the Royal Academy of Arts, London, is a milestone in Turner scholarship.Eric Shanes, a well-known expert on Turner and curator of the related exhibition, places the artist's watercolors in the wider context of his painted work and provides individual commentaries on the approximately 200 lush colorplates. Evelyn Joll investigates the market forces that brought Turner's watercolors into being, while Andrew Wilton analyzes their extraordinary effect on the art of later watercolorists. Finally, Ian Warrell discusses the critical reception to the work of this prodigiously talented artist. Turner: The Great Watercolours will stand at the forefront of thinking on Turner for years to come.

London's Royal Academy of Arts recently exhibited a large selection of Turner's "Great Watercolours," described in this catalog of the show as "finished"--works that were exhibited, purchased by collectors, or were models for engraving. The watercolors chosen (many from private collections) cover the range of Turner's long career and represent an exceptional display of some of the very finest works in English art. Concise and instructive essays by Shanes, Evelyn Joll, Ian Warrell, and Andrew Wilton, all experienced and respected Turner scholars, explore the art of the finished watercolor, the art market, period reactions to the completed product, and the influence of these paintings on some later artists. Shanes supplies the catalog entries, compiled with his customary interpretive zeal. Illustrations are abundant and almost exclusively in good, although somewhat muted, color; a number of the images should have been enlarged for greater effect. The annotated list for further readi ng is up-to-date and useful as is the chronology and glossary of technical terms. Endnote documentation. A fine overview of this key aspect of Turner's watercolor art. Recommended. General readers; undergraduates through faculty. W. S. Rodner Tidewater Community College