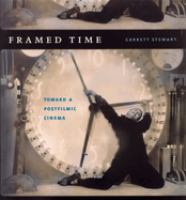 Framed time : toward a postfilmic cinema.

Italian director Michelangelo Antonioni claimed, three decades ago, that different conceptions of time helped define the split in film between European humanism and American science fiction. And as Garrett Stewart argues here, this transatlantic division has persisted since cinema's 1995 centenary, made more complex by the digital technology that has detached movies from their dependence on the sequential frames of the celluloid strip.<br> Brilliantly interpreting dozens of recent films--from Being John Malkovich , Donnie Darko , and The Sixth Sense to La mala educación and Caché --Stewart investigates how their treatments of time reflect the change in media from film's original rolling reel to today's digital pixel. He goes on to show--with 140 stills--how American and European narratives confront this shift differently: while Hollywood movies tend to revolve around ghostly afterlives, psychotic doubles, or violent time travel, their European counterparts more often feature second sight, erotic telepathy, or spectral memory. Stewart questions why these recent plots, in exploring temporality, gravitate toward either supernatural or uncanny apparitions rather than themes of digital simulation. In doing so, he provocatively continues the project he began with Between Film and Screen , breaking new ground in visual studies, cinema history, and media theory.

During the past ten years, new digital technologies have transformed the cinema in many ways, including the shooting, editing, and distribution of "films" (so-called, even though the 19th-century medium of celluloid is rapidly being displaced by 21st-century electronic media). Moreover, according to Stewart (English, Univ. of Iowa), the digitization of cinema also affects screen representation of time. No longer bound by "frame time" (i.e., the 24 frames per second moving through a camera or projector), a digital (or "post-filmic") cinema operates on "framed time," in which space and time are completely malleable. The book's greatest asset is its narrative analyses of some two dozen films from Hollywood and Europe--notably, of The Golden Bowl (2000) and Cache (2005). The book's greatest liability is its dense prose, which obscures rather than illuminates, as in this typical sentence: "The machine gunning of the digit, with its spray of pixels--rather than the rotary advance of the photogram--certainly unbinds any inherent indexical link between the modules of record and their mobilization in the filmic synthesis." This title will suit those with theoretical leanings. Summing Up: Recommended. Graduate students through faculty and professionals. J. I. Deutsch George Washington University