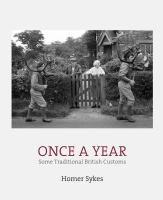 Once a year : some traditional British customs.

Once a Year: Some Traditional British Customs was first published in 1977 establishing Homer Sykes as one of the UK's leading young photographers. Over a period of almost seven years he travelled the country photographing around 100 traditional British customs, with over 80 appearing in the book. Though inspired by the 19th century photographer Benjamin Stone, Homer Sykes approached the events with a distinctly modern sensibility, creating dynamic images which focus mainly on the tradition that is being re-enacted against a background of everyday life.