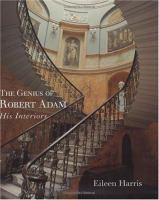 The genius of Robert Adam : his interiors.

"Robert Adam was one of the greatest British architects of the later eighteenth century. So widespread was his influence as a decorator and furniture designer that his name has become a household word. But it is the synthesis of architecture, planning and decoration that stands at the heart of Adam's achievement as Eileen Harris shows in this elegantly illustrated book. She considers in detail the interaction of each of these elements in nineteen of Adam's most accomplished interior projects, including some of the most famous British country houses and London town houses." "Most of Adam's enormous body of work was in pre-existing houses; the challenges of remodelling stimulated his inventive imagination, and he became a master at turning awkward situations to advantage. Harris has mined archival sources, including the large collection of drawings from the Adam office at Sir John Soane's Museum in London, and fully examined the houses themselves to discover exactly what Adam did in each project and why. Taking into account later alterations and renovations, Adam-revival additions, and so-called accurate restorations of the last twenty-five years, Harris brings to light how much of Adam's original work was conditioned by circumstance and how much was left to invention." "In her discussions of the planning, decoration, ceilings, carpets, chimney pieces and furniture of such interiors as those at Kedleston, Syon House, Osterly Park, Newby Hall, Culzean Castle, and Home and Lansdowne Houses in London, Harris uncovers the full extent of Adam's prodigious achievements."--BOOK JACKET.Title Summary field provided by Blackwell North America, Inc. All Rights Reserved

A.T. Bolton's The Architecture of Robert & James Adam (London, 2 v., 1922) has long been the standard work. Though other studies have appeared, most were general except for John Fleming's groundbreaking book on Adam's early work, Robert Adam and His Circle, in Edinburgh & Rome (London, 1962). Now art historian Harris, who has published extensively on Adam, has produced a superb and original study of the architect's works limited to his domestic interiors. It is thorough, including all his major houses, beautifully illustrated with photographs, and more important, the drawings, from the enormous Adam Collection in the Soane museum and from elsewhere, are reproduced mostly in color. Following an excellent introduction, Harris discusses in detail all the major houses, many of which were remodelings, beginning with Kedleston and going on to such wonderful interiors as Syon, Lansdowne, Osterley Park, Newly Hall, Derby House, Home House, and Culzean Castle. There are also plans, sections, and designs for furniture. Though Harris focuses on interiors, the facades of many of the houses are illustrated to give a more complete picture. Emphasis is on the formal aspects and sources of the interiors, not on social history. Excellent notes; thorough bibliography. A superb work, very highly recommended. General readers; upper-division undergraduates through faculty. T. J. McCormick emeritus, Wheaton College (MA)