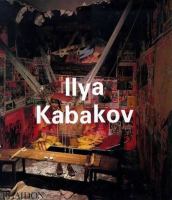 <p>Ilya Kabakov (b.1933) is recognized as the most important Russian artist to have emerged in the late twentieth century, with installations that speak as much about conditions in post-Stalinist Russia as they do about the human condition universally. His work has been exhibited at such major international venues as The Museum of Modern Art in New York (1991), the Centre Pompidou in Paris (1995) and the Stedelijk Museum in Amsterdam (1995).</p> <p>Kabakov's installations are, in some instances, akin to theatrical mise-en-scènes, reproducing a cramped communal apartment or a flooded art museum as a site of schadenfreude -like comedies on human struggle and doomed aspirations. Alternating between light-hearted irony and deeply poignant tragedy, Kabakov evokes a shadowy world in which fable-like miracles might occur: a homespun cosmonaut may fly into space or the radio/television aerial may spell out a poem against the sky.</p> <p>Boris Groys, an art critic and philosopher, surveys the artist's long career and analyses its philosophical and formal dimensions in terms of art history as well as the artist's own biogaphy. In the Interview, David A. Ross discusses the artist's practice and its bridging of Eastern and Western contemporary art. Iwona Blazwick, Director of the Whitechapel Art Gallery in London, concentrates on the artist's contribution to the 1997 Skulptur Projekte in Munster, Looking up. Reading the Words,a sculpture that dares to offer 'the very best thing that you have ever done or seen in your life'. An extract from the short story 'The Steppe' by Anton Chekhov comprises the Artist's Choice. The Artist's Writings range from extracts from his Kafka-esque The Life of Flies, to fictional letters of complaint on communal life in the Soviet Union, to texts on the significance to the artist of the legacies of Cezanne and Malevich.</p>