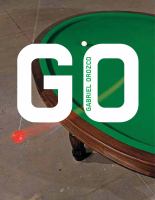 <p>Tate Modern Artist Series Description:<br> These books are part of the Tate Publishing series focused on living artists. Generously illustrated, accessible, and affordable, the Modern Artists Series is an essential reference for all those interested in contemporary visual culture.<br> Gabriel Orozco, born in Mexico in 1962, is one of the most influential artists of his generation. Dividing his time among Mexico City, Paris, and New York, his constant traveling has been as much a part of his artistic practice as a lifestyle. His works, often playful and characterized by an ironic humor, range from photographs to collages, sculptures, performance, paintings, and large-scale installation works--including a ball of Plasticine the same weight as the artist, pushed through the streets of New York, gathering the detritus of the urban landscape. Here, Jessica Morgan traces Orozco's artistic development. With more than 100 color illustrations, six key works examined in depth, and a new interview with Orozco, this is the perfect introduction to one of the most stimulating artists at work today.</p>