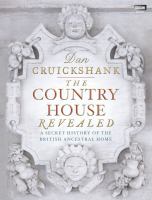 The country house revealed : a secret history of the British ancestral home.

Spanning the architectural history of the country house, from the Tudor ebullience of East Barsham Manor, the beauty and ingenuity of Hawksmoor's Easton Neston, the palatial Georgian sweep of Wentworth Woodhouse, with its five-mile trek from dining room to bedroom, the rigour of Kinross in Scotland, the Regency vitality of Daylesford, through to the Victorian exuberance of Clandeboye, the stories of these houses tell the story of our nation.All are still lived in as family homes and none are open to the public. But their owners have agreed to give Dan the run of each estate, and he'll be poking into attics, rummaging in cellars. There will be no hat box unopened or trunk unlocked, as he teases out the story of each house - who built them, the generations who lived in them, and the families who lost them. He'll uncover tales of debauchery and excess, huge wealth and eye-popping profligacy, of tragedy, comedy, power and ambition. And as these intriguing narratives take shape, Dan will show how the story of each house is indissoluble from the social and economic history of Britain. Each one is built as a wave of economic development crests, or crumbles. Each one's architecture and design is therefore expressive of the aims, strengths and frailties of those who built them, and together they plot the psychological, economic and social route map of our country's ruling class in this rich new telling of our island story.

TV tie-in. ; Includes bibliographical references and index. ; 8 ; In this book to accompany the BBC series of the same name, Dan Cruickshank offers us a rare opportunity to explore six of Britain's most beguiling country houses, guiding us around the architectural design of each one and discovering the stories of the people who lived in them.