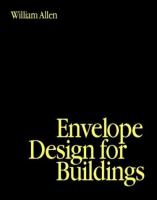 In this essential book Bill Allen imparts his experience gained over many years into the investigation and remedy of the numerous misfortunes which have afflicted buildings here and elsewhere. He provides not only a very substantial new body of reliable back-up for good modern design but also useful material for conservation, and for surveyors who have to evaluate premises or who become specification writers.<br> <br> <br> This book is divided into two parts, the first dealing with external and internal climates and the second with the ways in which the main categories of basements, walls and roof systems operation to mediate between them.<br> <br> The external climate is a character-forming part of the book because our climate, though technically temperate, is powerfully intemperate with buildings. The text of the book becomes markedly relevant to climates of the UK kind, but designers can also see what to look for as risk factors in other climates and how to evaluate them; the global nature of modern practice makes this important. When it comes to the envelope itself, the author works his way up from below ground to the roof. After a chapter on basement design, be begins with cavity structures; these now fall into several sub-categories and because they exploit the cavity in different ways, he looks at what goes on in a cavity and then handles the sub-categories around this. Cavities now have two main functions, the traditional one of being a rain barrier and the new one of being the repository for much increased insulation, and it is the latter that has greatly changed behaviour patterns because it results in sharp increases of the temperature range for the outer cladding, causing a lot of damage, and by the same token stabilises the inner leaf, opening the way for heating economies. There have been some disastrous fires in cavities, causing several deaths, and this risk is dealt with too.<br> <br> Curtain walls have a chapter to themselves and so do timber walls, and so many problems have developed in applied finishes and in doors and windows that these, too, have their own chapters.<br> <br> Finally roofs, flat and pitched, in two separate chapters. Flat roofs have a bad press and people are still suspicious about them, but we now know how to make them long-lasting and handsome, while pitched roofs have had a good press but sometimes don't deserve it. The corrosion of metal finishes especially lead, has be-devilled pitched roofs and given some terrible shocks; on one roof lead that was heavy enough to give 100 years protection failed in 10 months following official recommendations.<br> <br> The author is a well known consultant and is an authority in the field of 'oddities in buildings'<br> Book provides a good thinking base for design decisions about new buildings<br> Vital for architects, engineers, surveyors and clients