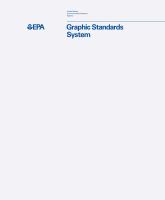 <p>A treat for both graphic designers and environmentalists: a facsimile of the graphic manual created for the Environmental Protection Agency in 1977.<br> <br> In 1970, President Richard Nixon created the Environmental Protection Agency (EPA) to confront environmental pollution and protect the health of the American people. One of the EPA's top priorities was consolidating numerous state offices to more efficiently carry out its goal of 'working for a cleaner, healthier environment for the American people.' But there was one area in which the EPA - like many government agencies of the time - was terribly inefficient: their graphic design and communications department. Millions of dollars were being wasted annually due to nonstandardized formats, inefficient processes and almost everything being designed from scratch. In 1977 the EPA began working with the legendary New York design firm Chermayeff & Geismar (now Chermayeff & Geismar & Haviv, or CGH), responsible for some of the most recognizable visual identities in the world, such as Chase Bank, PBS, National Geographic, the Smithsonian Institution, Mobil Oil and NBC. Partners Ivan Chermayeff, Tom Geismar and Steff Geissbuhler set about tackling this problem. The result was the 1977 US Environmental Protection Agency Graphic Standards System.</p>

Facsimile of the graphic manual created for the Environmental Protection Agency in 1977.