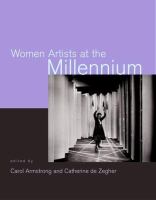 Women artists at the millennium.

<p> Artists, art historians, and critics look at the legacies of feminism and critical theory in the work of women artists, more than thirty years after the beginning of the modern women's movement and Linda Nochlin's landmark essay "Why Have There Been No Great Women Artists?" </p> <p>More than thirty years after the birth of the modern women's movement and the beginnings of feminist art-making and art history, the time is ripe to examine the legacies of those revolutions. In Women Artists at the Millennium , artists, art historians, and critics examine the differences that feminist art practice and critical theory have made in late twentieth-century art and the discourses surrounding it. In 1971, when Linda Nochlin published her essay "Why Have There Been No Great Women Artists?" in a special issue of Art News, there were no women's studies, no feminist theory, no such thing as feminist art criticism; there was instead a focus on the mythic figure of the great (male) artist through history. Since then, the "woman artist" has not simply been assimilated into the canon of "greatness" but has expanded art-making into a multiplicity of practices with new parameters and perspectives. In Women Artists at the Millennium artists including Martha Rosler and Yvonne Rainer reflect upon their own varied practices and art historians discuss the innovative work of such figures as Louise Bourgeois, Lygia Clark, Mona Hatoum, and Carrie Mae Weems. And Linda Nochlin considers changes since her landmark essay and looks to the future, writing, "We will need all our wit and courage to make sure that women's voices are heard, their work seen and written about."</p> <p>Artist Pages ByEllen Gallagher, Ann Hamilton, Mary Kelly, Yvonne Rainer, Martha Rosler</p> <p>Contributing Writers: Emily Apter, Carol Armstrong, Catherine de Zegher, Maria DiBattista, Brigid Doherty, Briony Fer, Tamar Garb, Anne Higonnet, Ewa Lajer-Burcharth, Molly Nesbit, Mignon Nixon, Linda Nochlin, Griselda Pollock, Abigail Solomon-Godeau, Lisa Tickner, Anne Wagner</p>