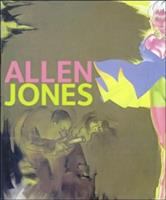 Top-shelf magazine meets fine art. High-heeled, fetishistic women parade through a world of Matissean color. Allen Jones's use of these apparent stereotypes has made him a controversial figure in the art world. Tackling issues of gender and power raised by his work, and including images of Jones's source material and his own photography, this is the first publication to survey his career. <br>Jones established his reputation in the 1960s as a Pop artist. Since then he has remained true to his these roots, developing a rich vein of imagery and exploring the boundaries between commercial and fine art. This important book goes beyond his fine art and also looks at other aspects of his career-his work for the theater, ballet, and film (Jones's work has been featured in Blow Up and A Clockwork Orange)-and reveals an artist who, having been influenced by the world of fashion, has seen his work appropriated by the fashion world.