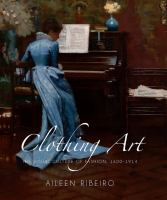 An entirely new way of looking at the history of fashion through the eyes of artists <br> <br> There have always been important links between art and clothing. Artists have documented the ever-evolving trends in fashion, popularized certain styles of dress, and at times even designed fashions. This is the first book to explore in depth the fascinating points of contact between art and clothing, and in doing so it constructs a new and innovative history of dress in which the artist plays a central role. <br> <br> Aileen Ribeiro provides an illuminating account of the relationship between artists and clothing from the 17th century, when a more complex and sophisticated attitude to dress first appeared, to the early 20th century, when the boundaries between art and fashion became more fluid: haute couture could be seen as art, and art used textiles and clothes in highly imaginative ways. Her narrative encompasses such themes as the ways in which clothing has helped to define the nation state; how masquerade and dressing up were key subjects in art and life; and how, while many artists found increasing inspiration in high fashion, others became involved in designing "artistic" and reform dress. Sumptuously illustrated, Clothing Art also delves into the ways in which artists represent the clothes they depict in their work, approaches which range from photographic detail, through varying degrees of imaginative reality, to generalized drapery.

Ribeiro (history of art, Courtauld Institute of Art, London) offers a fresh approach to analysis and investigation of dress and appearance in this richly illustrated book on the history and meaning of dress as depicted in art. The ways in which artists depict clothed figures reveals much about the construction of clothing in a given time period; its social and cultural functions; its relationship to the status, identity, and aspirations of the wearer; what it means about posture and movement; and how it reflects the relationship between body and mind. The book is divided into five parts--"Portraying Dress," "Identifying the Nation," "Dressing Up" "Painting Modern Life," "Designing Artists"--each beginning with an introduction, followed by two to four chapters examining the topic in depth. Chapters cover a wide range of subjects, including portraits and self-portraiture, national identity, aristocracy and social class, masquerade, Orientalism, classical dress, and the portrayal of beauty. This interpretation of clothing and fashion through the lens of art history will especially appeal to those interested in fashion design, women's history, and social and cultural studies. Summing Up: Highly recommended. All readers. --Caley Brae Cannon, Brand Library and Art Center