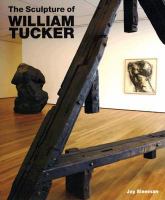 The sculpture of William Tucker.

William Tucker (born in 1935) is a British-born sculptor who moved to North America in 1976 and became an American citizen in 1986. This is the first major monograph on his work and includes a complete catalogue of his sculpture to date. Tucker began making sculpture in the late 1950s and came to public prominence along with fellow sculptors David Annesley, Michael Bolus, Phillip King, Tim Scott and Issac Witkin when they were included in the New Generation 1965 exhibition at the Whitechapel Art Gallery in London. Tucker and his contemporaries presented abstract assembled forms, often painted in bright colours and influenced by American abstract painting. The exhibition marked the conclusion of a period of intense dialogue and experimentation nurtured in the remarkable atmosphere of the sculpture department of St Martin's School of Art in London under the maverick leadership of Frank Martin.

In this first monograph on Tucker, Sleeman (University College London) offers a near-complete catalogue of his sculpture between 1957 and 2005. Tucker, born in Egypt and raised and educated in the UK, has lived in the US since 1978. He is an internationally recognized modernist with an impressive list of professional achievements. Tucker's The Language of Sculpture (1974) is a standard text. Sleeman provides the main essay on Tucker and his sculpture. Dense but articulate and exhaustively researched, the essay clearly profits from the artist's active participation. Sleeman tracks Tucker's work thematically and chronologically, offering readers significant insight into the artist's development as he moved from the detached abstractions of his early work to his hallmark figurative allusions of the present, and from independent objects to sculpture both tactile and environmental. The essay is well illustrated, and the catalogue references over 250 works with 200-plus high-quality illustrations and 12 color plates. The monograph also includes a chronology, a list of major exhibitions and collections featuring Tucker's sculpture, and a selected bibliography. It will be useful in libraries collecting works on 20th-century sculpture, and in those supporting sculptors, art historians, and curators. Summing Up: Recommended. Graduate students through professionals/practitioners. J. A. Day University of South Dakota