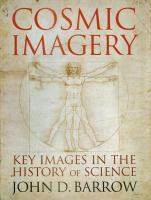 Cosmic imagery : key images in the history of science.

Certain key images embody our understanding of life and the universe we inhabit. Some, like Robert Hooke's first microscopic views of the natural world, or the stunning images taken by the Hubble Space Telescope, were made possible by our new technical capabilities. Others, like the first graph, were breathtakingly simple but perennially useful. Vesalius' haunting pictures of the human anatomy were nothing less than works of art, while the simple diagram now known as Pythagoras' Theorem - proved by the ancient Babylonians, Chinese, Indians and Egyptians long before the Greeks themselves - lay the foundations for modern mathematics. Many of these images have shattered our preconceptions about the limits and nature of existence- the first breathtaking pictures of the Earth from space stimulated an environmental consciousness that has grown ever since; the mushroom cloud from atomic and nuclear explosions became the ultimate symbol of death and destruction; the flying saucer came to represent the possibility of extraterrestrial life; while Mercator's flat map of the Earth coordinated an entire world-view. Cosmic Imagery takes us on a tour through the most influential images in science. Each holds an important place in the growth of human understanding and carries with it a story that illuminates its origin and meaning. Together they reveal something of the beauty and truth of the universe, and why, so often, a picture is better than a thousand words.